This was pretty good. You have to really like Italian Dressing though. I made a few changes. I used mild sausage that had been frozen. I semi defrosted it and sliced before cooking. Then I used fresh mushrooms and frozen combo of peppers and onions. I used Romano instead of parm, just because that's what I had. I also used tri colored rotini instead of penne for the same reason. tfs 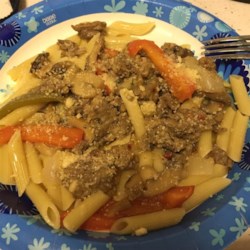