Oh Yay! I've never made any kind of bread from scratch before, and I was really nervous about this one. I was simply ASTOUNDED by how easy it really was. Particularly rolling out the dough. And it rose so beautifully. I feel so accomplished and they taste wonderful! LATER NOTE: After making these several times, I accidentally discovered that letting the rolls sit an extra hour before putting them in the oven actually makes them significantly better. LATER LATER NOTE: I wanted a wheat roll one evening, so I substituted half the white flour for whole wheat flour, and the results were still excellent. 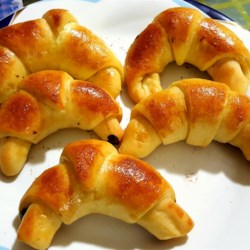