This is a really good bread, but the recipe is VERY vague. For example, it says to shape the dough into loaves, placing the seam side down...what seam? See now, if I didn't know any better, I wouldn't have rolled the dough into a rectangle & then rolled it (like a jelly roll) into a "loaf", making a seam...to put "seamside" down. BUT I just assumed that rolling was the way to go & the bread turned out great. I don't have a bread machine, so I made it using my kitchen aid w/ the dough hook. I also took it out of the oven after 15 minutes & brushed it again with egg white & that also gave it a very nice crust. I liked the addition of brown sugar in this recipe compared to my normal recipe. Thanks for the tip Verla! 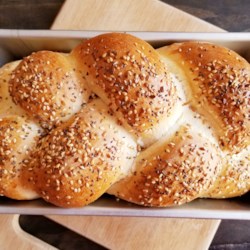