I used butter instead of corn oil and I used a couple tablespoons of mild chilies from the can only because I don't keep jalapeno peppers on hand and I really didn't want it to be too spicy for the little ones. In my cast iron skillet, mine was done at just under 35 minutes. I took a tip from a girlfriend of mine and melted butter in the skillet in the hot oven before adding the cornbread batter for a buttery, crispy crust. We all liked this a lot. The flavor of this cornbread was wonderful. I'd like to try this next time with Mexi-Corn and see how that is in this recipe. I think it would be good with pepper-jack, too. Making it in the cast iron I think is what made it SO good. But, isn't almost anything made in cast iron good? ;) 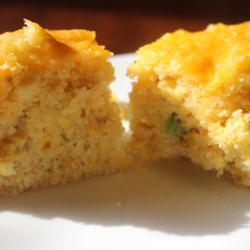