I have to give this recipe 5 and a half stars. This was my first time making any kind of bread. I read at least 40 reviews to get different perspectives. I followed all the directions to the tee. I made sure to have all my things together so I could move along smoothly. I used a baby thermometer to make sure my water was 110 degrees. I know this sounds absurd but I just had a baby and I have at least four new ones sitting around the house. I was really scared that the water would be too hot or not hot enough. I waited about two minutes to add the honey. I added the flour one cup at a time. It was easy to stir when I added the three cups of wheat flour. Once I got to the third cup of all purpose flour I started to worry that I was stirring it too much. So I transferred the mixture to my stand mixer with the dough hook. I added the last two cups of flour and let it knead for 10 minutes. I am glad I decided to put the dough in a gigantic plastic bowl to rise instead of leaving it in the mixing bowl because it would not have fit once it rose. I cut my oven on pre heat and cut it off after two or three minutes. Just enough to get it warm. I sutck the dough in to rise. After punching the dough down I made to loaf shapes and put them in the greased pans. I needed the oven to begin to pre heat for baking so I put them in the microwave this time. I didnt cut it on just stuck them in there. It took 30 minutes for them to rise again. To my surprise when I took them 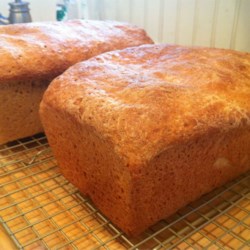