Absolutely delicious. A few problems with the recipe though. #1 problem- 3 bags of spinach is not going to fit even in the biggest skillet. I used a giant pot until it wilted down then I finished the recipe in a deept skillet. #2 problem --For the beginner in the kitchen (not me) the measurement "6 slices of shredded provolone cheese" was not exactly accurate. How much is a slice? 1oz? Less? Not sure. You can't shred a slice of cheese either. LOL. Cups or ounces would be better or else it gets intimidating for someone to not know how much to actually use or doesn't know how to eyeball yet. If you've made creamed spinach before, not so scary since you know what it looks like while cooking. Otherwise more accurate measurements are better. I used about 9oz cheddar and parm combined. #3 problem--1 1 and 1/4c of liquid is too much. I used 1c heavy cream 1/4c half n half. The spinach is literally floating (albeit in a yummy cheesy garlicky sauce). I had to add a TBSP of flour to thicken the sauce. I would cut it down to 3/4c or add little by little to see as I go. I tried to squeeze as much water from the spinach but maybe that's why its too liquidy. I should have squeezed harder! This is a great base recipe to experiment with different cheeses and lower fat liquids and great for low carb dieters. YUMMM. Sorry about the critique on the actually recipe but I feel like no one should be afraid to cook and inaccurate recipes can easily scare a beginner. 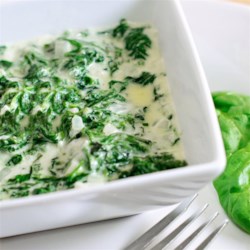