A truly excellent take on the standard burger-on-a-grill. I won't bother with the telling you what I added or subtracted... most grillers have their own "special" ingredients that they swear by... I'll mention two things that seem to be a recurring theme. One is cooking the bacon and the burger together. This is caused by the thickness of the bacon, and the heat of the grill. If you're using standard grocery-store bacon, then you're probably fine with a high-heat grill; however, if you're working with a thick slab bacon, you might want to slightly lower the grill temperature and give the burger time to catch up with the bacon... The other issue is how the burgers hold up on the grill., and this is partially due to the binding proteins in the egg. If you're following the recipe and using 1 lb of hamburger, then only use 1/2 an egg. Once you've got it mixed in, form into patties, and let rest (covered) in the refrigerator for at least an hour... longer, if you have the time. Even so, they're still a bit tender on the grill, so make sure that you preheat the grill, then scrape the grill with a wire brush. Finally, put some veggie oil on a paper towel, and rub down the grill, just before cooking. This should keep the grill slick, and reduce the chance of them breaking apart. With the exception of reducing the egg by 1/2, I would strongly recommend that you try this recipe, as written. Even if you're not of fan of onions, you just might be surprised at what you taste... keep the 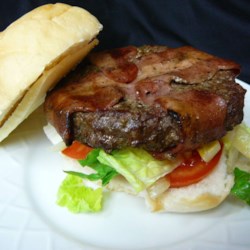