If I could give this recipe more than 5 stars I absolutely would! This was so delicious! I had a lot of fresh blueberries given to me and I was looking up recipes to use them in and this is the first one I tried. This is also the first fruit pie I have ever made. I just subsituted the fresh blueberries in place of the frozen. I did use a 12 oz. frozen pie crust instead of a 15 oz. refrigerated pie crust. I don't think it really made to much of a difference. The eggwhites brushed on and then sprinkled with sugar made it taste amazing. I did put tin foil over the edges so they wouldn't burn. The blueberries and the cherries mixed together tasted so good! I topped my piece with whipped cream and my fiance had vanilla ice cream with his. But it would be delicious by itself! I still have a ton of blueberries left and a lot of different recipes to try out but I plan to make this again soon! ::UPDATE:: I ended up freezing a lot of the fresh blueberries I had this summer. I have made this pie several times using fresh and several times using the same blueberries frozen. Even though the pie is delicious both ways it is better using the frozen blueberries! When using the frozen -you don't loose the blueberry taste to the cherry pie filling. 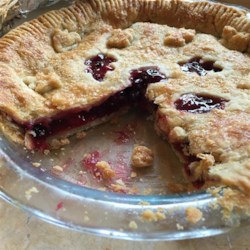