I like that the ingrediants came together without a special trip to the grocery store. I was a bit dissapponted in the final product. For begining bakers this comes out very well but the end product was not a show stopper here. I baked for only 50 minutes and probably could have pulled it out after 45. I garnished with chopped almonds instead of candy pieces. The flavor was more of a two for me with the second layer of dough tasting too much like egg but the ease of assemble and ingrediant list bumped this to a 3 star. Would i make it again? Perhaps in a pinch but I would probably jazz it up by rolling dough out as 8 seperate balls, flattening, topping with the second layer and then adding sweetened creamcheese or presevers for a filling and lightly striping with icing and sliced almonds 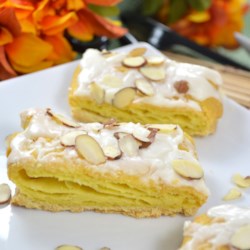