I tried to stick to the recipe as closely as possible my first time making it. I will remake it, but I will be making some changes next time. My review for the recipe as it is written is middle of the road. My 7 year old son and I both liked it, but my mother did not care for it and my 5 year old daughter thought that being required to eat it was a fate worse than death. I did not like red peppers in this recipe because I found the sweetness off putting. The biggest thing about this recipe that I consider a fail is the corn flakes. Mixing them with sour cream and baking them in the casserole rendered them unrecognizable blobs of mush. What I liked best about this recipe is that it is a vegetable casserole where the veggies are the star of the show. I felt like 4 out of 5 vegetable casserole recipes were calling for a can of condensed soup, and I am all set with that. Next time, I'm going to begin by using green peppers and half a minced onion and sauteeing them in bacon grease before adding them to the casserole. I will also roast the cauliflower florets instead of steaming them. I will use 8oz of sour cream and 8oz of greek yogurt mixed with the sharp cheddar, and I will skip the corn flakes. Instead of just the parm on the top, I will mix the parm with the corn flakes and some crumbled bacon. 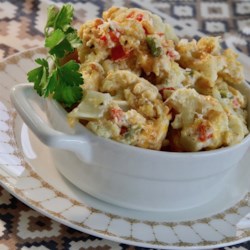