This is a very nice flavour combination. Next time, I think I'll try shredding or even mashing the potatoes and mixing that layer with mayo before laying it. I also think I'll crumble up the egg rather than slicing it as was suggested by some other reviews. When I lived in Russia that seemed to be the common thing to do and it holds together better that way when you serve it. Thanks for the recipe! 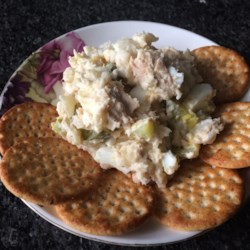