This recipe was fantastic! The hash browns were golden and crispy on the outside and creamy in the middle. My girlfriend said she felt like hash browns with bacon and onions in them so I used this recipe as my starting point. First, I pan-fryed 6 bacon strips until crispy (next time I will use at least 8). Then I broke up the bacon into tiny pieces and added them into the mix with the other ingredients along with 1/2 red onion chopped, sea salt and cracked black pepper. Also, i made little hash brown patties rather than covering the whole pan. They really turned out nice. 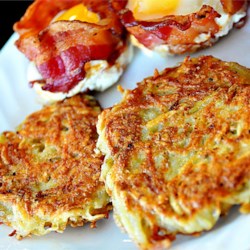