Good down home green beans. I did make some changes, I substituted season salt for the salt. I increased my seasonings, but similar to other reviewers I felt that keeping the seasonings at the suggested measurement wasn't enough, since the water diluted it. I added minced onions, garlic, and slabbed bacon. I also used cooking oil instead of lard and decreased it to 1 tsp, since my bacon made enough fat. 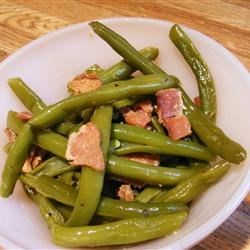