This recipe is just like the recipe I got from a mummu (old Finnish grandma) who showed me how to make them before I left the country. She of course made them without a recipe, and I roughly tried to copy it down into a recipe, and it came out pretty much like this. FYI, there are two types of rye flour: course (or regular) rye flour and fine rye flour. Use the course flour for this since you'll be mixing wheat flour in with it. Also, you'll end up putting about the same amount of wheat flour in as rye flour, so you don't have to do it one tablespoon at a time, you can almost double it at first and then add slowly until the texture is right. You can also add egg white to the butter to brush on top, and you can also brush them again while they're oven if you want them super golden brown and soft, but it's hardly necessary. For the rice, try to use sushi or short grain rice, but if you can't find it, I think Thai Jasmine rice is the next best. Also, these are best with whole milk and real butter. Finns usually serve these by spreading butter on top, followed by some type of cheese (usually Edam). It's very common to eat them with ham, and you can really put on whatever you want (tomato, lettuce, etc.). A lot of work, but worth it! 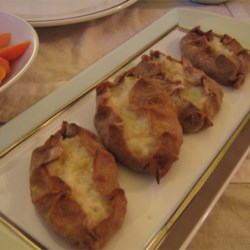