This is definately the best skillet-cooked burger recipe I've had had. I followed the recipe primarily except for omitting the salt, pouring in a full can of beef broth to increase the sauce, and adding some provolone cheese at the end. The sauce was fantastic, with a great flavor. The down side: my husband and I found the burgers a little bland, because almost all the seasonings were in the sauce, rather than the burger. I think that for next time, my recommendation would be to sprinkle some of the thyme on each side of the burgers during the browning stage, along with some other seasonings, such as pepper, onion powder, and garlic powder. I will be making this again in the future. 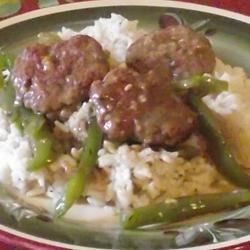