Mmm, mmm good. We could have used more than the one smallish squash I used, as our pork chops were pretty big. I blanched the squash to make it easier to peel and really could have made the slices at least 1/4" thick to keep them from overcooking. Used seasoned salt, doubled the other spices, added some marojam and poultry seasoning. Then used the chop drippings for half the butter and browned the onion before adding the flour, spices, and broth. This was a major hit. Next time I will double the squash and cut thicker, but it was still *so* good. 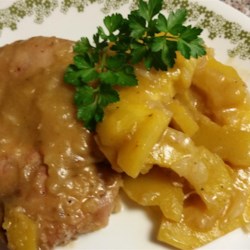