This soup was delicious. My only change was to add a small onion to the butter in the beginning, because I don't like onion salt. Surprisingly the pickles, juice, milk and curry powder worked. UPDATE: I've made this one several times in the past few months. Everybody, including those who don't like pickles says this is the best soup they're ever had. At first I started adding onions to the beginning of the soup. I now use a bunch of leeks, sliced thinly and washed instead of the onions at the beginning of making the soup. The leeks add to the creaminess, and they're an amazing mild compliment to the strong pickled dills. 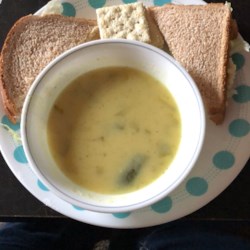