Made this for the wife last night. I used brummel and brown yogurt spread stuff instead of butter, and low sodium Kikkoman soy sauce. I tasted the butter/soy sauce combo (I TATSE EVERYTHING!) before applying it to the salmon, it really was delicious. No need to brush the sauce onto the salmon, it's not thick like BBQ sauce. You can just pour it on. It's gonna run off anyhow. I coated the fish with lemon pepper, maybe i should have just lightly sprinkled. The recipe doesn't mention any flipping, so being a man obsessed with computers, photography and not cooking, I naturally didn't flip it either. It began to get black on the top after about 5 minutesin the broiler. I told my wife, and she asked me when I flipped it. HAHAHA So i flipped it. The blackened portion was actually tasty, the lemon pepper was lemony, and i enjoyed the fish. However, it came out of the pan with all kinds of unattractive blackness on it, and it was on the greasy side. I'm gonna try it again, changing the following: Unsalted butter instead of brummel less lemon pepper A dash of olive oil added to the butter/soy mix before applying to fish 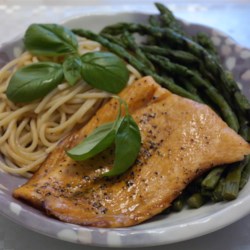