Absolutely fabulous; loved this recipe, was so sure I would be missing the familiar much lovde tastes of traditional cheese or oil fondue, wich I do so love. But no, this much healthier version dose not disappoint. All the fun and flavor of traditional fondue without all the guilt.I doubled the spices as well as the wine as others had suggested and was not disappointed but I neglected to strain the wine spice mixture before cooking, not a problem until near the end when the wine had cooked down quite a lot and you did come into up close contact with the spices (in your mouth) not good. In the future I maylet the spices simmer with the wine for some time but would try to strain them out befor too long. I made this for a friend after a long day at work; she came over for a glass of wine and was so suprised and delighted. It was so easy I was almost embarrassed, we had shrimp,scallops,chicken,green pepper, onion and mushrooms to cook.Evreything was good but the shrimp jumped out as the star, plumped up by the wine it would literally burst in your mouth with an unexpected explosion of flavor.I only purched a handful of each at the local supermarket on the way home. The scallops were also tasty not at all rubbery, but next time I will buy the larger size.Next in prefence were probaly the mushrooms also magnifing and compounding the flavors.The chicken was good but did not compare to the seafood. I would recommend this recipe to evreyone. 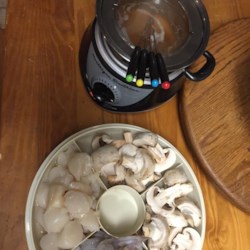