This chili is fabulous! I have a Hungarian wax pepper plant that had three gorgeous peppers on it, and this is the recipe I decided to use them in. I substituted ground turkey breast for the beef and light Polish kielbasa to make this chili really healthy. Also, by mistake, I used Cubanelle peppers instead of Anahiem (although they are almost identical in taste). What also drew me to this recipe was the lack of salt, as we are on a very low sodium diet. I was really nervous because there was no liquid other than the vinegar, but the tomatillos and the tomatoes gave off a lot. The end result was a medium spicy, delicious chili with great flavor! I did sprinkle in some cumin after tasting, but that is just personal preference. Thank you for the recipe! 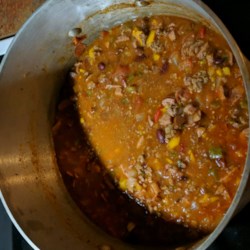