I thought this sounded wonderful, but I was disappointed in the blandness of the roast. Even the lowest stove setting was too much for the sauce and ruined it, causing the sauce to become too strong and drowned out the flavor of the roast. I think I'll try cooking it 1 more time in a bit of broth instead, and add the spaghetti sauce later. I also think this would work better in a crockpot after browning the meat, rather than doing all the cooking on the stove. 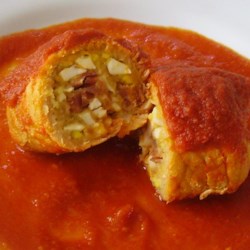