I read all 33 reviews before making this dish and decided to make as directed first. I cooked the broth and vegetables in a large skillet and the broth cooked way down while the veggies were cooking so mine was not soupy at all. It had just enough broth to keep the pasta moist after I mixed the pasta into the dish at the end. I added enough red pepper flakes to make it mellow and not hot. I too felt it needed more seasoning beyond salt and pepper, but I didn't want to go the southwestern flavor route. I waited until the whole wheat pasta was cooked, then tried a taste test with a spoonful seasoned with basil. Next, a spoonful with oregano. I ended up adding dried basil and dried oregano to taste (a generous half-teaspoon each) and it tasted very good with the cheese sprinkled on. This is a very good week night dish. I liked it and my husband did also but commented that he would like maybe some Italian sausage on the side! I will make this again. 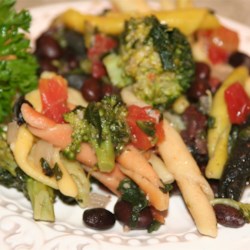