I opted for the slow cooker since it seamed fool-proof and should have been very tender. But no. Started the cooker at 7am St. Patty's Day. 11 hours later I stuck a fork to it. Brick. Fork wouldn't even penetrate it. Same after 14 hours. Ended up cooking this center-cut beef all night and pulled the plug after 21 hours with slight increase in tenderness but it sure smelled great! Had it for dinner the next night and everyone loved it even though it was still very firm. Next time I'll use a more conventional recipe from Allrecipes and just drink the beer on the side :) UPDATE: I believe my problem was in using Guiness EXTRA Stout. This, as I found out later, has a much higher alcohol content than regular draft. Almost 4 times as much. Too much booze would certainly toughen the roast. 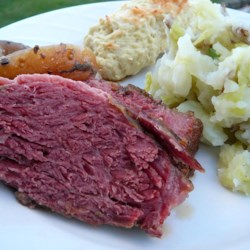