This was a new experience for me! I have never even tasted Chile Verde before, let alone make it myself. I don't know what's "authentic" and what's not or how it's supposed to look or taste. After a little research and after reading some of the reviews, I gave this a shot. First, I roasted the tomatillos, jalapenos and poblanos at 400* for 12 minutes, then pureed them in the food processor. I dredged the meat in flour, browned it, added the chopped onion, yellow bell peppers and garlic. Deglazed the pan with 1/4 of the amount of chicken broth called for (given so many reviews indicating there was far too much broth in the recipe). I put everything in the slow cooker along with the cumin, and Mexican oregano, salt, pepper and chopped, fresh cilantro to taste. My plan was to serve this in tortillas with sliced avocado and queso fresco, but this was still just too liquidy for that. Alternatively, the thought of eating what was essentially a stew of pork and tomatillos with a bowl and spoon didn't appeal to me either. So, authentic or not, I added a can of cannellini beans (white kidney beans) for the recipe scaled down to 4 servings and 1-1/4# of meat. Now I had something! The beans definitely gave it substance, interest and texture, and appealed to my ingrained "there's got to be beans if it's chili" way of thinking! This was tasty enough, but maybe just too different for me. 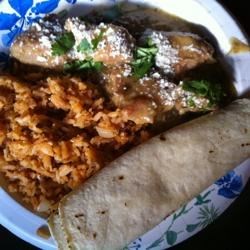