This recipe is delicious. Based on other reviews, I used beef stock (approx 4 cups) instead of water. I used 2 cans of seasoned diced tomatoes. I added Old Bay and cajun seasoning to spice it up. I also added a small can of diced chili peppers as well as a half pkg of dried onion soup mix. Since others said the rice may get mushy, I cooked my brown rice separately. I used 1 cup of rice to 1 1/2 cup of water (instead of the usual 2 c water to 1 c rice) so that the rice would cook completely once added in the end. Delicious!! Update - I had not made this since I reviewed it in Oct 2006, but I made it again using Andouille sausage instead of smoked sausage. Gave it lots of flavor and was truly delicious! Give it a try! 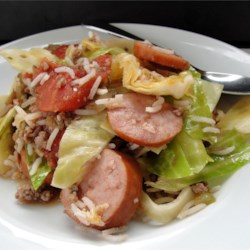