THESE WERE AMAZING!!!! I goofed up.. I didn't have any whisky so I just omitted that, I found out at the last min that I didn't have any tomato paste so I used ketchup instead.. since ketchup is not as thick as tomato paste I used less water, 1 cup. I also used a real onion, 2 garlic cloves & chili powder instead of chile pepper since I always have that on hand. Other than that everything else I did exactly to the recipe. I also had to cook the sauce alittle longer since it started out watery but I'm telling you it turned out PERFECT! I was surprised at how easy these were to make, the prep was not that hard or that long, than I just let everything cook for 2 hours while I cleaned. When ready I gave everything to hubby to grill. He just had to grill the ribs for about 10 mins, he used half the sauce for coating the ribs while grilling & when they were done cooking he used the rest of the sauce to put on the ribs so they are very sticky & dripping w/ sauce. This was the first time I've ever made ribs and they were INCREDIBLE! ****UPDATE**** I make this every few weeks now. I use boneless pork ribs b/c you get more meat, I double the recipe for extra sauce & I did try to make it exactly how it's written & it's also incredible that way but since I don't normally have whisky or tomato paste I stick to the way I made it the first time. I show off & make this for company & so far EVERYONE is Blown away by these ribs. I've given out this recipe a number of times! Thanks Scott! 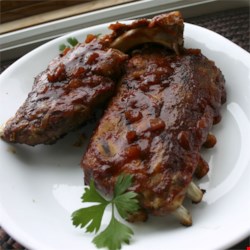