I've never had a Mango Lassi before nor have I ever heard of them, so I have no idea what they're *supposed* to taste like. I made this only for Hubs this morning as I'm not a fan of yogurt based drinks. Since I used Greek-style vanilla yogurt I reduced the sugar by half, which turned out to be just right. He described this as rich, creamy and pleasantly sweet with a mild mango flavor. He found it refreshing and rated it four stars. I, however, found it tasted more or less like thinned out yogurt - I'd rather have a cup of yogurt! 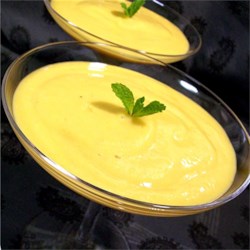