Great recipe. First time I made this I just bought a jar of roasted red peppers and it worked great. Tonight however I had some time so I halved and roasted my own peppers in the oven. MUCH easier than I thought and the skin just comes right off. For a sweeter sauce, I used one yellow and 2 reds instead of just 2 reds. On that note, This recipe calls for 2 peppers, but I used 4 large bell peppers (keeping the other measurements the same) and you could taste the peppers much better. Also at the end while simmering... try adding a few oz's of chopped sundried tomatoes... it adds a nice burst of flavor that is great for pasta, meat or whatever. Bottom line is this sauce tastes great on everything i've put it on. 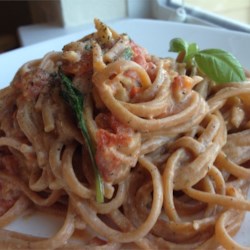