I think this was a great recipe. I used real bacon, so no oil was needed. I used 2 large eggs instead of just egg whites, and the mixture stayed on pretty well with no real spills. The only thing is each time, I didn't need to cook it as long as stated--I cut a couple minutes off each step, otherwise it would have burned in my oven. My only real issues were with the CAULIPOWER pizza itself. When I first baked it, I put it directly on the rack like I always do with frozen pizzas (and the box directions said it could be done that way)--it left a big mess. I used a pan once I put the egg mixture on. Also, the crust was just okay; I'm sure if I had to be gluten free, I would get used to it. Overall, I don't think I would have liked the CAULIPOWER Margherita pizza by itself, but with this recipe, it helped it to taste good. 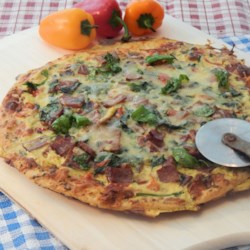