As an incredibly inexperienced baker, I found this recipe reasonably simple and very tasty. With the first batch I made the mistake of not rolling the dough thin enough. The taste wasn't impacted, but they didn't hold their shape. The second batch turned out with a better triangle shape. When I make these again I won't add the flour all at once, seeing as I probably added another cup while I was rolling the dough. 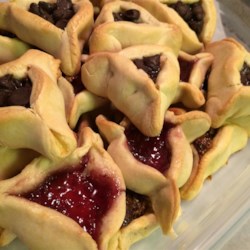