I read the reviews n made a cpl of adjustments. But I LOVE this recipe!! Oddly I like quiche but don’t love too much egg, so I added lots of stuff so they were barely held together by the egg. I used broccoli, mushroom, onion n ham. To hold everything, I used about 1.5 of all ingredients. 6 eggs because they were small for being called large, and someone else said they might use 4 next time. And 1.5x the cheese, milk, spices, etc. I only had almond milk so that’s what I put in. I also added the 1/8 tsp cayenne that another person suggested. These were delicious, I’ve told my mom about them, n I’ll definitely make again!! Thanks for sharing the recipe!! 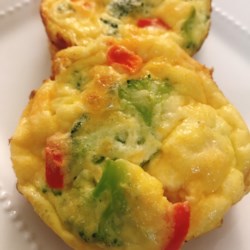