I've been making this for years & can't believe I'd fogetten to review it. It's always a hit! I do make some changes. I use fresh baby spinach (usually a bag of already washed ready for a salad spinach) chopped in to ribbons, red onion, and feta cheese instead of mozzarrella. I also add italian herbs, garlic, and typically either chopped red peppers, olives, or both. I cut the total amount of butter to about 4 tbs, use 2tbs to saute the onion, red pepper, and/or olive & throw the spinach in with the onion until wilted instead of boiling it. The rest of the butter gets melted & added as directed. I also have used even less butter, and it still comes out great. 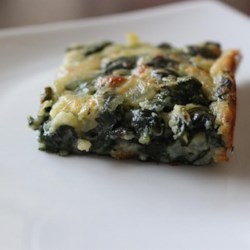