This was a really fun, easy recipe! I had in-laws coming over and for dinner was making Chef John’s Creamy Pork stew. Since I had pork and an extra pumpkin on hand, I gave it a try. The seasonings and braising liquid were from the stew recipe. After browning the pork, I stuffed as much pork as would fit into the pumpkin and added the “stew sauce” and some extra apple cider for the braising liquid, then cooked as directed. It turned out just like the video, and was a great way to show off to the in-laws! In my opinion, the pumpkin was the best part, as it did take on the delicious flavor from the pork. Great recipe, Chef John! 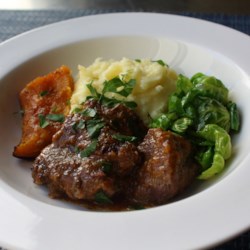