Good soup! I made the following substitutions due to what I had in my kitchen and it was delicious: 1. I didn't have red enchilada sauce, so instead, I used pasta sauce and added 2tbs chili, 2 tsp oregano, 2 tsp basil, 2 tsp cumin, and 1 tsp garlic powder to it 2. I only had 28 ounce cans of hominy. Added the whole can (drained) and it was great 3. I didn't have pork, so I used some NY steak instead 4. I didn't have cilantro, so that got left out. Would've been better (I think) if cilantro was added. 5. Added some avocado as garnish. 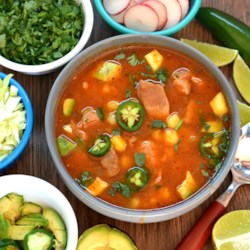