This was a change of pace from the other enchilada recipes I've made. While I'm not vegan, I do enjoy all types of food and vegan dishes. I would definitely tweak this if I were to make it again. This would benefit from some vegan cheese in the filling or melted over top, or even some vegan sour cream (made with cashews). As is, the enchilada sauce was overpowering. Be sure to use a good quality sauce, or homemade as suggested. I used a red enchilada sauce, but think I'd probably prefer it with green. This also makes a lot of filling...way too much actually. I filled each tortilla with 3 *tablespoons* (equal to 9 teaspoons) instead of the 4 *teaspoons* stated in directions and still had filling left over. Also, even though I finely chopped the onion (using my food processor), there were still some uncooked pieces, which was unpleasant. 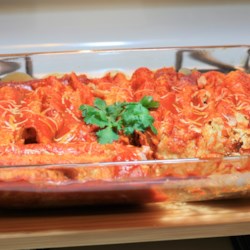