After reading the five reviews this recipe already had I decided to follow France C.'s advice and marinade the chicken in hopes of attaining flavorful moist chicken. I mixed the the stock, salt, garlic, lemon, capers and olive oil in a zip top bag and added the chicken. I used Tyson's frozen thawed boneless skinless chicken breast since that's what I had on hand. I let it marinade for about 3 hours. I then removed the chicken from the marinade and browned in a cast iron skillet. Added the marinade and peppers to the same pan. Since the reviews commented on over baked chicken, I set my oven to 350 degrees knowing that my cast iron pan was hot and holds heat well during baking. I baked for 20 minutes before checking. It was well done and dry. I wish I would have checked it at 15 minutes. I am not sure why the recipe states 40 - 45 minutes cook time as that is way too long for this recipe. The chicken was full of flavor. 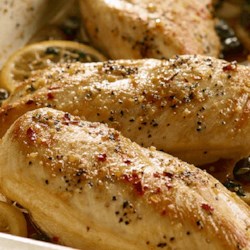