I decided to give this recipe a try and was disappointed in the results. The hot water crust worked perfectly and was easy to spread and work with. However, I had issues with the filling. It was easy enough to mix and season, but the recipe did not indicate any way to deal with all of the grease that was going to come off of the pork. I was a bit surprised to not see any thickener such as gelatin. After cooking the pie for about 1 hour 45 minutes (plenty of time) we let the pie cool for about 30 minutes. However, this was clearly not long enough. After slicing into the pie, all of the grease started to, literally, pour out of the opening (at least this confirms that my pastry was sealed well)! I assume if we had continued to let the pie cool until it was room temp, this would have solidified. However, the amount of grease that came out makes me believe that even if it had solidified, it would have left the pie tasting way too greasy. The actual filling did not taste too bad, but the amount of pork products made it very salty and it was rather loaf like. While this is likely what was supposed to happen, it is not a personal preference and made it less appealing. If you are still looking to make this recipe, I would recommend par-cooking the pork mixture in a pan to be able to drain off some of the grease. In addition, it would help the texture. Lastly, I would let it cool for at least a couple of hours before serving. 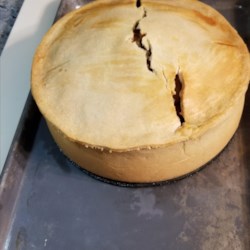