I chose to leave the Miracle Whip out altogether but other than that made as written. If you plan on using both the Miracle Whip and the Mayo I recommended cutting back on one if not both of them. My cabbage was very dressed and that is with leaving a cup of the Miracle Whip out. I made two different slaw's for taco's last night. I preferred the other more vinegary one but hubs thought this one was better. We both agreed that the pickle was a nice touch. I thought the cajun season seemed out of place but it worked. If you like the more creamy style slaw's, I recommend giving this one a try. 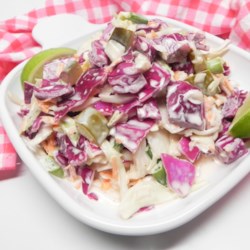