This one is difficult for me to rate . I never tried the sauce from Mc Donald's so I don't have anything to compare it with. What I will say is that the flavor and texture was good and it worked well as a dipping sauce for the popcorn chicken I made. The one problem I did have is that something balled up as soon as it got to medium heat even though I was whisking continually. I think it was the cornstarch but I'm not sure? Again, I never tried the original sauce but with a name like Szechuan I would expect some heat. Maybe there wasn't, I don't know? On that note, it tasted just fine as written but in the end I added a healthy dose of rooster sauce to the mix and that made it even better. 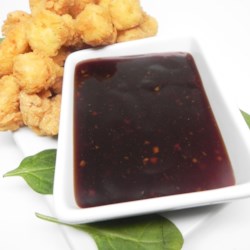