Being from the Northeast I never ate much Mexican but when I briefly lived in the Midwest I learned to make these sort of tacos. The locals called them tortillas but I later found out the tortilla was just the corn wrapping and not the name of the dish. We made them with all the usual taco fillings like seasoned hamburg, lettuce and tomato, onions, cheese, sour cream and taco sauce. The secret is the soft corn tortilla that you do not fry until it is crunchy but rather until it is limp and pliable. It frys very fast. Plop one at a time in the hot oil. It will puff up, then turn it. When it puffs again remove it immediately to drain the oil on a paper towel. The dish known as soft tacos is usually made with the already soft flour tortilla. I way love these soft corn tortillas better than those and the crunchy corn type. 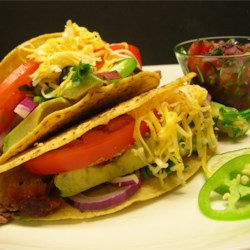