I saved this recipe a long time ago and am just now getting around to making it. I have to admit, with only one 5-star review and one 2-star review, I was a little hesitant, but today was the day I jumped in and decided to go for it. A few changes -- I do not have vanilla sugar, so added two extra tsps. of sugar and in place of vanilla, added 1 tsp. of lemon oil (because I like tart desserts). I also sprayed the pan (I used a jelly roll pan) with non-stick spray rather than buttering. Otherwise, I followed the recipe exactly. When I tasted the batter, it was a little bland and I realized that the recipe does not call for salt -- I think it's the missing ingredient. I added 1/2 tsp. of salt and was much happier with the taste of the batter. The batter was quite thick and goopy, but it leveled itself out in the 400-degree oven. The top of the cake did have a few little "warty" looking lumps, so when I make it again, I will sift the flour and baking powder together. It only took 17 minutes -- watch baking time. I doubled the glaze and glazed the cake while still warm (as an option), which made it very moist. I served with a dollop of whipped cream and raspberries. Not bad, but by the next day, they were dry and not nearly as tasty. 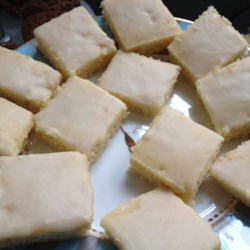