We aren't huge on cake eating here so I like to take cake recipes and make cupcakes - we like them much better! That was what I did to this recipe. I did cut the recipe in half and made a few changes. It sounds like from the reviews this recipe is pretty good to start so because I did make it with some changes I am giving it a rating of 4. I reduced the amount of allspice and cloves. The amount just seemed too much for our preference. I also made my own buttermilk with sour cream, apple cider vinegar and a little bit of almond milk. To frost I made a blackberry buttercream by adding blackberry jam to the buttercream I was making. Turned out pretty good - and I will definitely be sharing at the office tomorrow! 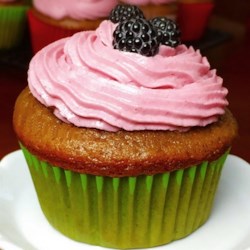