Good concept, but way too many salty ingredients. I followed the advice of other reviewers, by omitting the M. cheese. I also cut way back on the Old Bay, because of reviewers who had found it salty. It was still very salty, probably due to the parmesan cheese. I may try it again someday, by substituting other white cheeses for most of the parmesan, and sticking with just a sprinkling of Old Bay, or substituting other herbs for that, too. 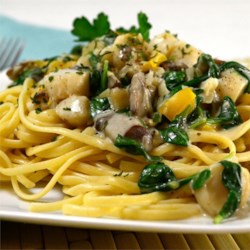