While this tastes pretty good, there's just a few issues I had with this. First, there's no baking dish size listed, so you kind of have to wing it. I made it in an 8 x 8 square pan and had to bake it for 54 minutes. I think it would work better in a 9 x 13, but it would have been nice to have the baking dish size listed. Second, I feel like there's too much milk for this recipe. I think 1 1/2 cup milk, and an extra egg would be perfect. And lastly, I think this would benefit from allowing the oat mixture to absorb the milk/egg mixture for awhile. So maybe, make it the night before, and then bake it the next morning to allow the oats to soften a bit. Overall, I would make again, but with a few more tweaks to it. Edit: The next day, the bananas on top turned really liquidy and watery. I would add mashed banana to the oatmeal mixture and not bake it on top. 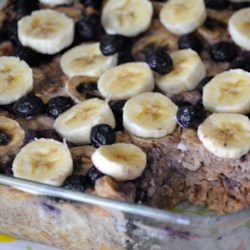