I've made this recipe several times now, and it is the best rice pudding I've ever had. I will pretty much only use this recipe from now on. Comes out very creamy and rich. It's also super easy to make and I love that it only takes one pot. Don't be afraid of the egg trick here. As long as you stir in the egg yolk fast with the heat off, you aren't going to have scrambled egg in your pudding, trust me. The first time I made it I followed the recipe to the letter. It was perfect. In subsequent tries, I've made it with part heavy cream instead of all milk, which gave it a little added richness. I've also used other dried fruit like raisins and cranberries. You can also vary the flavoring, like almond extract instead of vanilla, or nutmeg instead of cinnamon. 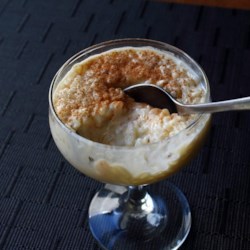