I'm an expirimental baker, so i made a double batch. with one batch i added about 1/4 teaspoon of cinnamon, and the other was the recipe. My familt and friends preferred the cinnamon apples before they were baked, but the strawberry ruined the flavor of the cinnamon. Overall, if you add the cinnamon don't use strawberries. 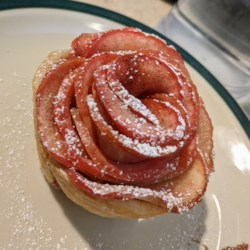