I followed the recipe exactly (used quick oats). I didn't care for the underlying oat flour-y texture/taste. As with the previous reviewer, I know now I am not a fan of uncooked oatmeal. I heated it up in the microwave and it was marginally better after adding more milk and some extra sugar. I thought the amount of spices was a bit over- powering, in particular the ginger. FYI, rather than make up all that spice mix and potentially have it sit around for who knows how long, here are the ingredients for one serving: 1/4 tsp each of cinnamon, ginger and allspice, and 1/8 tsp of nutmeg and cloves. Personally I would cut the ginger to 1/8tsp also if I was to make this again. 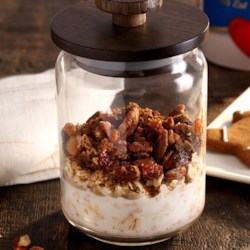