Well, I followed the recipe exactly... After baking the cake for the correct time it still wasn't done in the center. Forty minutes later it was done but the middle had sunk and there was a hard crust formed over the top... I ended up throwing it away. Maybe I screwed something up, I don't know, but I was very dissapointed. 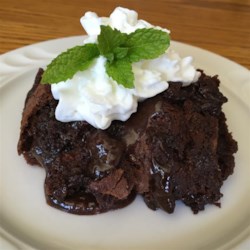