Man, these were DEFINATELY not what I was craving. If you like cake-type brownies, then these may be up your alley. I thought they were WAAAAY to thick. I doubled the batch as suggested by others, I even added a little extra oil, just in case and removed them from the oven earlier than suggested. The batter was extremely thick, which should have warned me, but I thought I would give the recipe the benefit of the doubt. I made a double batch of peanut butter frosting, which was the best part. I was very disappointed and wasted a lot of ingredients. My husband took one bite, made a face and put it back on his plate. He loves "cake style" brownies, but these ruined it for him. My reccomendation, try another recipe, don't bother trying to tweak this one. 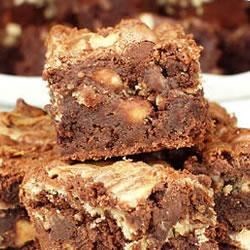