Made this today and didn't get to eat dinner until after 8:00PM because I didn't get started as early as I wanted. However that's my fault, since I knew what I was getting into before I started. I'd say all the simmering is worth it though as it results in a very deep and unique flavor. I'd liken it to kind of a sweet and savory stew over pasta. Quite rich actually. It's pretty easy to make, with 90% of the actual work being in the preparation. After browning the meat and adding the aromatics, you basically leave it alone, save for a few stirs here and there. I wouldn't give it the rave reviews as some others have, but it's good. I'll probably make it again, but more as a change-up than as a staple. **EDIT** Just wanted to come back and say that the leftovers are absolutely delicious and far better flavor than the the initial meal. Really pleased with this sauce even a week after making. **EDIT2** It has been a few months since I made this, and now I am absolutely craving it!! I don't think I realized how much I liked it. Now bumping this from 4 to 5 stars. I cook for one and I had so many leftovers. It froze really well. I put it in the freezer in single portion containers and then just made some fresh pasta whenever I wanted to have a meal. Either the flavor just grew on me, or the longer it sits after preparation, the more the flavor improves. Such a unique taste that I can't wait to have again. 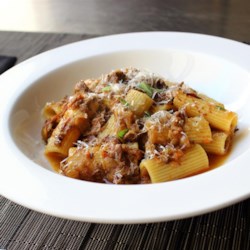